WITHOUT MITIGATION, the new coronavirus pandemic could kill as many as 2.2 million people in the U.S., according to a report from the Imperial College of London Covid-19 Response Team. Even taking critical steps such as social distancing of the entire population, isolation of the sick in their homes, and quarantining family members of the sick, the epidemic will likely soon overwhelm the critical care capacity of American hospitals, according to the report. The British researchers told the New York Times that they shared their findings with the White House task force on the virus “about a week ago.”

A disproportionate number of those who get sick and die will almost certainly be poor. In addition to a lack of paid sick time and medical care, low-income Americans often have another risk factor that could make the virus more deadly: long-term exposure to air pollution.

Ironically, as economies shut down in response to the global spread of the virus, air quality is actually improving during the pandemic. Satellites have already measured the changes in China, where NASA tracking showed that emissions of nitrogen dioxide were down as much as 30 percent throughout February as the virus swept through the nation, and in Italy, where levels of the gas and other air pollutants similarly dipped as people stay inside to avoid infection.

Nitrogen dioxide, which is released when coal, oil, gas, and diesel are burned, is terrible for the lungs. In addition to being a climate pollutant, the chemical causes reduced lung function and increases wheezing, asthma attacks, inflammation of the airways, and hospitalizations. Nitrogen dioxide also harms the heart, driving up rates of heart attack, stroke, acute heart failure, and death from heart disease overall. 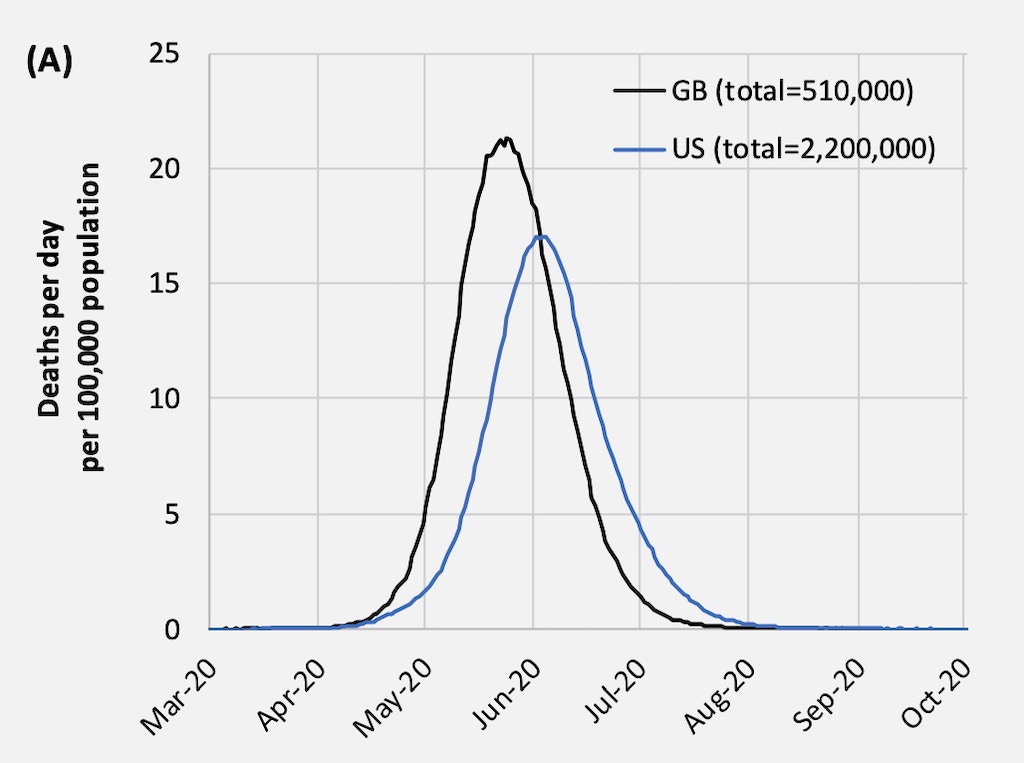 Modeling of unmitigated epidemic scenarios for Great Britain and the U.S.

But the recent dips in air pollution levels come too late to help those already sick with Covid-19.

“The air may be clearing in Italy, but the damage has already been done to human health and people’s ability to fight off infection,” Sascha Marschang, acting secretary general of the European Public Health Alliance, wrote in a statement. In Italy — as in the U.S. — communities that usually have high levels of air pollution also have high levels of health problems that put them at particular risk of dying from the virus.

“Patients with chronic lung and heart conditions caused or worsened by long-term exposure to air pollution are less able to fight off lung infections and more likely to die,” Sara De Matteis, associate professor in occupational and environmental medicine at Italy’s Cagliari University, said in a statement. “This is likely also the case for Covid-19.”

The earlier viral outbreak known as SARS showed that patients living in areas with moderate air pollution were 84 percent more likely to die from that virus than patients in regions with low pollution, according to a 2003 study.

In the U.S., some 141 million Americans, more than 43 percent of the population, now live in a county that failed on at least one basic measure of air quality, according to a 2019 report from the American Lung Association. The poor are most likely to contend with — and die from — hazardous air. And death rates from asthma, which is also linked to pollution, are three times higher among African Americans.

The weakened response due to long-term exposure to air pollution is just one of many reasons that poor people already typically die earlier in the U.S. The gap in life expectancy between the wealthiest 1 percent of Americans and the poorest 1 percent is almost 15 years. This underlying health disparity along with the failure to maintain the public health systems by paying for enough emergency equipment, planning, and primary care physicians, leave the poor at particular risk from the coronavirus.

“The same people who are risk for the worst impact of the coronavirus are the ones who are already suffering the most because of air pollution,” said Elena Craft, senior director for climate and health at the Environmental Defense Fund. “Places like Seattle, New York, and Houston — these major metropolitan areas are impacted by air pollution in a very serious way. Many of them don’t meet the guidelines for particulate matter and ozone. So it’s the double-whammy effect where they already have underlying chronic conditions that predispose them to adverse effects from the virus.”

It’s not surprising that a great proportion of those who are particularly vulnerable — whether because they have lived with pollution or underlying diseases — are the poorest among us, said Richard Cooper, an epidemiologist, cardiologist, and professor of public health sciences at Loyola University Medical School. “As always, this will roll downhill,” said Cooper. And because the virus spreads indiscriminately, he said, the vulnerability of some sets the entire country up for cataclysmic impacts.

A lack of medical capacity, including a shortage of ventilators and the respiratory therapists who operate the machines, is expected to make the outbreak especially dangerous. In their report, the researchers from the Imperial College of London predicted that in an uncontrolled epidemic, the need for beds in hospitals’ intensive care or critical care units would be exceeded as early as the second week in April in both the U.S. and the U.K., with an eventual peak “that is over 30 times greater than the maximum supply in both countries.”

Cooper is adamant that at this moment in the crisis, minimizing social interactions is the most important way to protect everyone. “A shutdown is the only thing that matters now,” he said, noting that governments and individuals need to take actions to immediately restrict activities. But, while acknowledging that Americans are beginning to understand that they need to maintain social distance to slow the spread of current outbreak, in the long run, he said, we need to address the dramatic inequity that already leaves some Americans so vulnerable.

“All of us on the good ship civilization are headed for an iceberg, and we just made a 15-degree turn away,” said Cooper. “But what we really need is a 180-degree turn.”