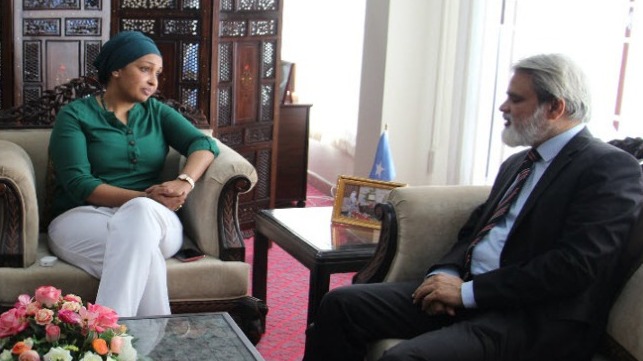 Almakhzoumi was speaking in a meeting with Dr. Syed Mohammed Anwer, President of Maritime Study Forum (MSF), an organization dedicated to being a leading platform for generating policy-oriented dialogue, facilitating trade deals and conducting research and analysis on national, regional and global maritime domains.

The meeting took place among the series engagements between the MSF and African State representatives as part of MSF's “Look to Africa Plan” formulated in early 2019. The plan aims to lay a scheme through which African States and Pakistan can boost the current volume of trade between them through the creation of a bi-lateral maritime trading network and mutual investment.

Anwer and Almakhzoumi discussed potential maritime economy links between Pakistan and Somalia. Giving a brief account of trade and economic relations the ambassador said, Pakistan and Somalia are active commercial partners, trading a variety of commodities.

“As Somali Ambassador to Pakistan, I consider my role is to facilitate the contacts between the players in the research and economic field, to get them to know each other better and also to interconnect in a better way,” she said. The Ambassador said Pakistan and Somalia can improve cooperation in various fields like fisheries, ship breaking, agriculture, energy, health, education, tourism, transport and the various Telecom sectors.

While sharing her impression about Pakistan the ambassador said, Pakistan is among the few countries in the world where every feature is worth appreciating. Whether this is a topographical, weather, architectural or traditional. Pakistan has most beautiful places to visit and its natural beauty is unmatched. “I have travelled to many countries of the world, but I have never seen people as gracious and friendly as those in Pakistan.”

Relations between the modern-day territories of Pakistan and Somalia stretch back to first century CE. The Periplus of the Erythraean Sea, written by an unknown Greek writer, gives proof regarding the trade links between the cities of the Horn of Africa and the Sindh region of Pakistan.

In modern times Pakistan and Somalia have developed a strong trade and defense relationship with trade and business ranging from agriculture, food products, livestock, fish farming and textiles to pharmaceutical products, leather products and cement. Pakistan has also on various occasions supported law and order in Somalia by sending troops as part of UN Peacekeeping.

The opinions expressed herein are the author's and not necessarily those of The Maritime Executive.