Alberto Salazar, Coach of the Nike Oregon Project, Gets a 4-Year Doping Ban

The United States Anti-Doping Agency announced the penalty against Salazar, a former star runner and a coach to top runners.

Alberto Salazar, a coach of some of the world’s top distance runners, has been barred for four years from the sport for doping violations, the United States Anti-Doping Agency announced Monday night.

The penalty stemmed from violations that included trafficking in testosterone, tampering with the doping control process and administering improper infusions of L-carnitine, a naturally occurring substance that converts fat into energy, the anti-doping agency said in a statement.

Salazar was notified in 2017 that he had violated doping rules, and he contested the findings by USADA, according to an anti-doping official familiar with the case who spoke on the condition of anonymity. The case was heard in arbitration last year, and the ban was imposed by an independent arbitration panel.

As head coach of the Nike Oregon Project, Salazar, 61, has trained stars such as Mo Farah of Britain, a four-time Olympic champion on the track; Galen Rupp, the top American marathon runner; and Sifan Hassan of the Netherlands, who set a world record in the women’s mile in July and over the weekend finished first in the 10,000 meters at the world track and field championships in Doha, Qatar.

“I am shocked by the outcome today,” Salazar said in a statement posted on the website for the Nike Oregon Project. He said he had always followed the rules of the World Anti-Doping Agency and that he planned to appeal the ban, presumably to the international Court of Arbitration for Sport.

Jeffrey Brown, an endocrinologist from Houston who has worked with Salazar, also received a four-year ban, USADA said. Both have denied wrongdoing. Brown and Nike did not immediately respond to attempts to reach them on Monday.

Travis Tygart, the chief executive of USADA, said in a statement that Salazar and Brown had “demonstrated that winning was more important than the health and well-being of the athletes they were sworn to protect.”

Salazar’s ban is the latest scandal in track and field and distance running, where so many doping violations have occurred over the years that every outstanding performance brings immediate suspicion from those closely involved in the sport.

Farah is no longer coached by Salazar. He and Rupp have vigorously denied violating rules against taking banned substances.

Salazar was once among the world’s top marathoners, with three victories in New York (1980-82) and, most famously, one in Boston (1982). But his career mysteriously hit a wall, and he ended up battling injuries and depression. Salazar eventually became a sports marketing executive with Nike, and in 2001 helped form the Nike Oregon Project, a training program with the explicit goal of making American distance runners competitive again at major international competitions. 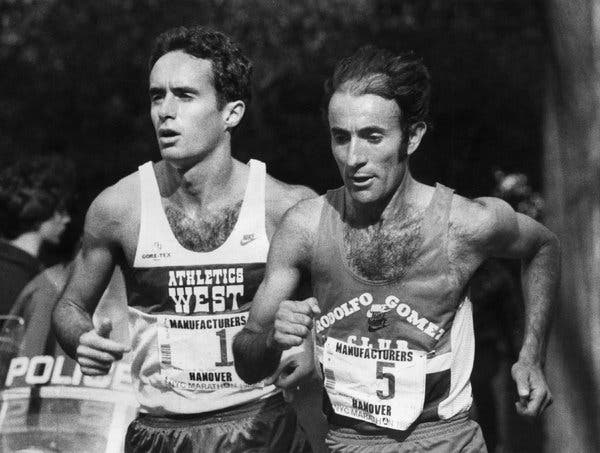 Along with his coaching skill, Salazar became known for operating in a gray area, using unconventional methods and pushing the envelope of what might be allowable under the letter of the doping rules.

A 2015 report by the BBC and ProPublica detailed allegations that he had experimented with testosterone, a prohibited steroid, and had pressed athletes to use substances like thyroid and asthma medication that they did not need for medical purposes in an attempt to enhance performance.

The 2015 report also described an accusation by a former coaching associate of Salazar’s that he had used his son Alex as a “guinea pig” for testing supplements and that the son had also admitted testing rub-on applications of testosterone gel.

In a rebuttal to the report, Salazar acknowledged testing a testosterone gel on his sons. But he said it was only an experiment to see whether runners could be sabotaged into a positive doping test if someone surreptitiously rubbed a banned substance on them.