Already struggling with the over-crowded camps due to little space, the Delhi violence victims were unable to sleep as the rain on Saturday and last week drenched the camps and mattresses. 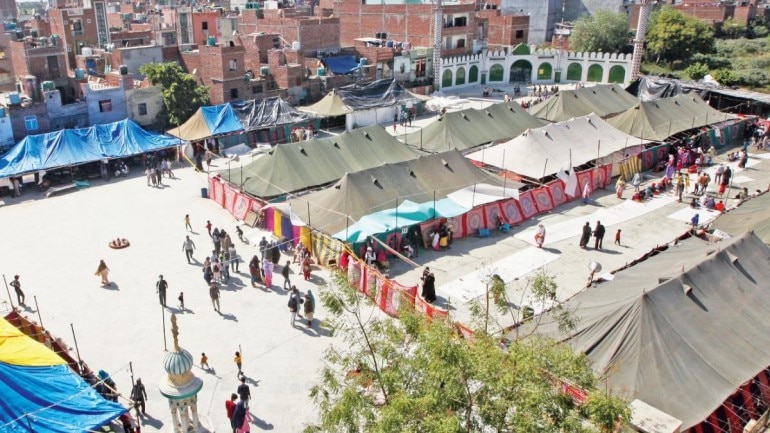 There seems to be no relief for the riot-affected victims in the city. After they lost the roof over their heads in the recent violence, the untimely rain in the national capital has made life more difficult for the riot victims at a relief camp in Mustafabad of Northeast Delhi.

Already struggling with the over-crowded camps due to little space, the victims were unable to sleep as the rain on Saturday and last week drenched the camps and mattresses.

Clearly, it is a double whammy for hundreds of riot-hit people displaced by the violence as they now become vulnerable amid Coronavirus scare with cases spiralling in the Capital too.

Most of the riot-hit families stay at the Mustafabad camp set up by Delhi Waqf Board and Delhi government. The camps are not completely water-proof and when it rains, several tents start leaking from the roof turning things from bad to worse for people staying inside.

Also, the rainwater enters the camp and drench the mattresses making it impossible for them to sleep, rest or even sit.

"Whenever it rains, the water enters the camp and our mattresses get drenched. I, along with 15 other relatives and children, were unable to sleep," said Noorjahan, a resident of Shiv Vihar whose house was torched during the violence.

The Delhi government, along with other non-profitable organisations, has arranged medical camps, mattresses, blankets, clothes and food facility for the people but it is not sufficient, according to many people who are living in the camps.

Sixty-five-year old Nabeela, who is staying with her three daughters-in-law and their children, told Mail Today, "We had our own house till a few days back. We never imagined that our life will turn this way. They first looted our house and then used 3 gas cylinders to torch our house. I don't know what will happen to our life."

Nabeela's daughter-in-law who is worried about her two children said, "I am worried about how our children will get an education. This is not a life anyone would like to live."

We had our own house till a few days back. We never imagined that our life will turn this way.

Volunteers, from the government and non-profit firms, have been urging people to wash their hands and maintain cleanliness. Many volunteers have been providing medicines and sanitisers besides counselling people settled in this camp, who are more vulnerable to any diseases than anyone else in the Capital.

For four days from February 23, mobs armed with iron rods, stones, and Molotov cocktails unleashed violence that claimed at least 53 lives, with both sides suffering the consequences.

Already battling with the post-violence trauma, the families who survived are faced with a new threat of Coronavirus which has already reached Delhi-NCR. Across the country, 107 people had tested positive for the virus.

To avoid panic, those associated with the relief have avoided using the word Coronavirus for fear of spreading panic, even as many people have been reporting cough, fever and other ailments. For now, the camp management has restricted visitors' entry to the camp.

"We give them medicines, masks and urge them to wash hands properly," said Laik Ahmad, from Doctors' Unity Welfare Association.

Ankita Upreti from Self-Employed Women's Association said volunteers have been trying to ensure there was no panic among people due to the virus.

"These people have gone through so much... There are a lot of problems to deal with and we have not been able to pay attention to Coronavirus threat properly. For now, we are asking people to maintain cleanliness and wash their hands," she said.

There are a lot of problems to deal with and we have not been able to pay attention to Coronavirus threat properly.

"The non seasonal rain for the last couple of days added to the worries of people living together in large numbers in shelter homes. The role of the state government is very important at this point especially when deadly Coronavirus is spreading in the country. They are highly vulnerable and living close to one another. It's up to state health machinery to provide essential items like face masks and hand sanitisers. Dirt and unhygienic atmosphere can enhance their vulnerability," he said.

AAP MLA from Mustafabad, Haji Yunus said, "We have received complaints from people suffering due to untimely rain. We are taking all measures in the relief camp and have ensured new mobile toilets and beds for the affected people."

Members of the many peace panels are working overtime, also with cops and administrative officials, in the affected areas. Mohammad Wasil, a local from Jafrabad and one of the active members of an aman (peace) committee, said the challenge was to bring the displaced people back as the riots had led to a huge trust deficit among people who coexisted for generations.

(With inputs from Ajay Kumar and agencies)