A whistleblower’s account of alleged malpractices at Kenya Ports Authority (KPA) threatens to end the reign of Managing Director Daniel Manduku and other senior officials.

Now a key State witness in forensic investigations being undertaken by the Director of Criminal Investigations George Kinoti, the whistleblower says the port is a hotbed of corruption.

Contacted, Dr Manduku said investigations are ongoing and that KPA has provided all the required documents. “Our staff have also recorded statements with the DCI. We shall await and abide by any further instructions,” he said.

In his statement seen by the Nation, the former port anti-graft czar accuses Dr Manduku of overseeing shoddy tenders, crooked internal works and protecting officials facing corruption allegations, while in some cases promoting them.

For instance, he questions the management decisions with regards to Sh101 million roofing of the headquarters contract awarded to Zunaksha.

“KPA did water proofing several times at the headquarters, what is the urgency this time around, just after doing proofing less two years ago?” he questions.

Some internal works, such as repainting of the headquarters at a cost of Sh79 million also raised eyebrows. The firm involved in the latest painting award was identified as Sanjud Enterprises.

In another case, Mr Okhako questions why KPA interdicted artisans and low-level staff, leaving behind those who recommended and approved the payments of a fresh water project where KPA allegedly lost Sh35 million.

“The names of senior staff were removed from the disciplinary records and innocent artisans left on the list to carry the cross of their bosses. It is a pity to see innocent junior officers suffering while the main suspects are free,” Mr Okhako said.

The KPA is currently battling a fresh water case in court with its suppliers after one of them sued for breach of contract.

The port refused to pay some of the suppliers after an internal audit unearthed discrepancies that included inflated and fictitious water deliveries.

Mr Okhalo also questioned the construction of a water tank at a cost of Sh84 million at the headquarters.

“How do you do concrete works, spending millions of shillings, then come back and destroy the same concrete to build a water tank? Surprisingly, there is yet another unutilised tank at the same venue next to the same car park,” he stated. 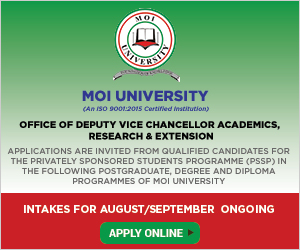 Mr Okhako says he tried approaching the managing director to discuss concerns over claims that he was directly benefiting from circumventing the procurements system in favour of proxy companies but in vain.

“There is a claim by staff in civil and finance departments that procurement rules in civil and concrete works are being breached to enrich Dr Manduku, and two others.”

Mr Okhako cites a presidential circular 1/2018 which requires that if a public entity awards a contract, it should be displayed on its website showing name of the company, its directors, amount of the award and method used to procure.

“How come most of these contracts have not been reported to the relevant regulatory agency, and they are not on Ifmis and KPA website? How come they were not budgeted for in 2018- 19 FY?” he questions.

He also cites the latest transfer of senior KPA staff as a “punishment by Dr Manduku to officers who refused to toe his line”.

The managing director is alleged to have perfected the transfers of the officials who were spearheading integrity drive at their departments, hence exposing the agency to corruption deals.

Already, Mr Kinoti has written to Transport Cabinet Secretary James Macharia seeking administrative action against Dr Manduku after the whistleblower, who was also moved, notified the DCI boss of intimidation tactics intended to frighten him.